A variety of recyclable materials from the waste stream are sorted and baled at MRFs (Material Recycling Facilities) which need to be competitive in the market.

ANIS manufacture a wide range of channel baling presses that can be customised to clients’ needs:

This extensive range of channel baling presses and our knowledge and experience gained from years in the waste industry allows us to solve most WR problems. We can provide a complete solution – conveyor, baler, wrapper, bag opener, ballistic, magnetic and mechanical separators, and integration with an MRF plant.

Our sales team works closely with our customers and carries out waste audits to determine the most suitable baler for each application. Baler installation and on-site training is carried out by fully qualified ANIS engineers.

In addition, ANIS have a team of service engineers who provide an excellent after-sales service.

In most cases, we install the shear baler with bale size 110 x 75 cm (ATS110-75), 5 vertical bindings and a compression force that provides a specific pressure of min. 11 kg/cm2.

The PET bottle perforator we produce ourselves is installed as a section of the feed opening and automatically shifts in and out when selecting the different types of material. 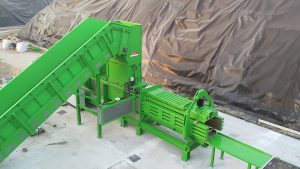 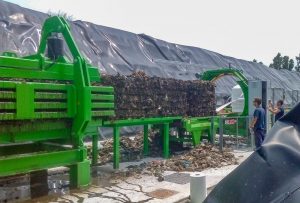 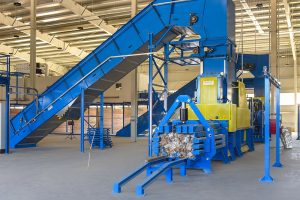 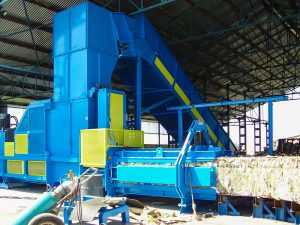 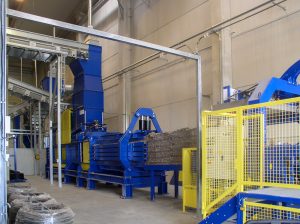 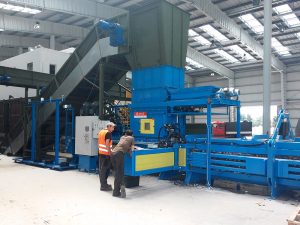 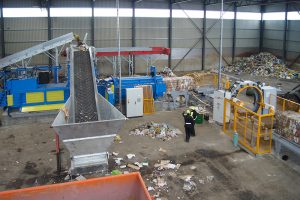 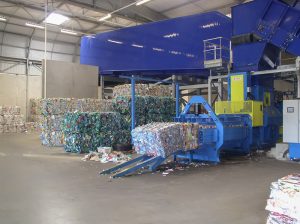 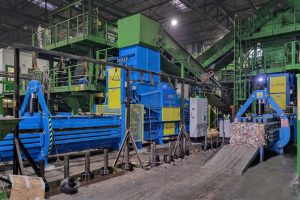 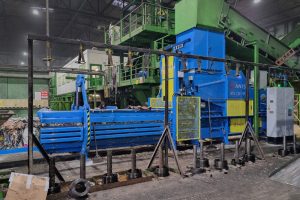 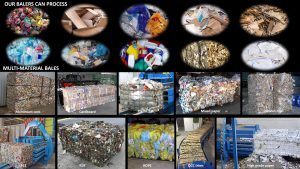 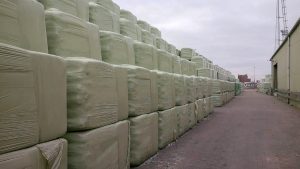 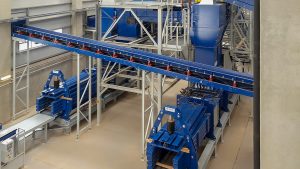 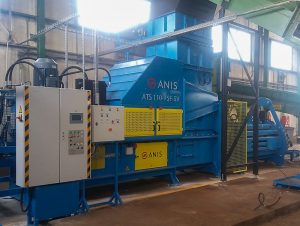 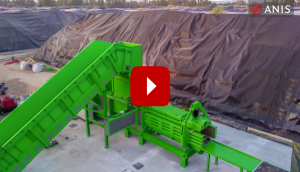 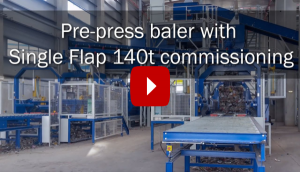 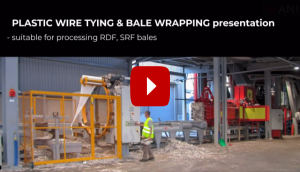 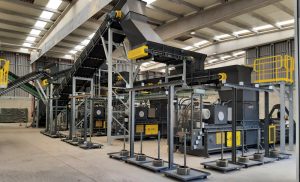 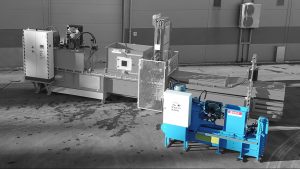 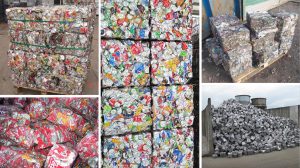 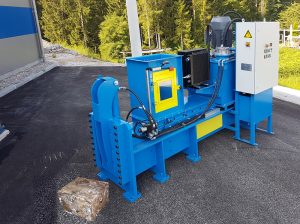 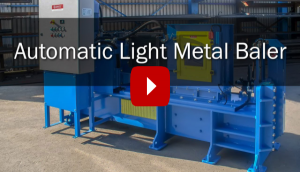 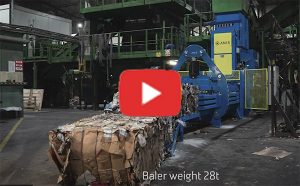 A variety of recyclable materials from the waste stream are sorted and baled at MRFs (Material Recycling Facilities) with heavy-duty channel baling presses that easily bale different kinds of material.

The advantage of this small size can baler lies in its compact frame construction which allows it to easily fit into the cramped spaces that are often held by such Recycling Centres.

Finally, the ANIS Automatic Light Metal Baler which makes small no tie-off  and very dense bales of sizes 40 x 40 x (10-30) cm var., is suitable for direct use by foundries and steel mills. Designed for aluminum cans, chips and turnings.

1. What is the most common terminology (synonyms) for balers adapted for Waste Management Centres?

2. What are the advantages of a single-ram baler vs. two-ram baler?

The single-ram baler or channel baling press has a higher capacity; it can bale more material during the same period, because the tying cycle has shorter than a two-ram baler. This also gives the benefit of having a consistent throughput which makes feeding easier for the loader operator which is more convenient for the automated feed chain belt conveyors.

Another big advantage is found in single stream MRFs plants because they process multi-material waste. Bunker management is made easier because you can tie bales of various lengths with constant bale density.

3. What are the main factors for increasing bale weight?

The whole purpose behind baling any material is to densify it – to squeeze more material into less space and produce highly compacted and stackable bales for optimal truck loading. These facts are the best proof of the excellent efficiency of these channel balers.

Kilograms per cubic meter are the standard measurement of density. Density achievement should be most important fact when selecting baling equipment. The density of a bale can be considered more important than its weight, even though the weight of a bale is usually the focus of recycling processors such as balers. Why? Because the same material e.g., cardboard can be process wet or dry and the bulk density of this material can vary up to 100%, which effect of the bale weight. Maximizing density can save a processing plant a tremendous amount of money in reduced wire use, storage, shipping, handling, and maintenance costs.

4. How to increase throughput of the channel baler.

5. What the new generation channel baling presses include to increase compaction capacity?

The new horizontal baling presses include increased high-capacity retention in the pressing chamber and increased compaction capacity. With this new hydraulic baler technology, the density obtained can easily be compared with those obtained with two ram balers without sacrificing the throughput. Higher density bales ultimately reduce wire cost, optimise truck loading, and minimize the amount of bale storage needed.

6. How does a pre-press (preflap) and shear (cutting) technology increase efficiency?

The pre-press is a very interesting technology since the pre-compaction increases the volumetric efficiency of the baler when baling fluffy material or those having flow characteristics like plastics or cardboard boxes which haven’t been pre-conditioned.

In combination of a shear blade eliminates the potential material blockages or jams of the pre-press when baling large products like cardboard. With these type materials, eliminating the operation of the pre-press results in reduced cycle time and increase throughput when baling other materials like smaller cardboard trims, mixed paper, newspaper or perforated pet bottles.

The combination of a pre-press flaps and shear baler technology brings the best versatility as you can comfortably bale many materials regardless of their density and eliminate the jam. Further, the pre-press will reduce wear on the knives and shear blade.

7. What pre-press or pre-compaction technologies exist in the baler?

The choice of the most suitable press technology depends on your type of business and the materials you process.

8. What does a pre-fill valve do on the hydraulics system?

The pre-fill valve increases the main ram moving speed in both forward and reverse modes. This device allows to reach higher throughput than regular baler with significantly less energy consumption. The baler can obtain an increased speed up to two and a half the speed of a traditional regenerative hydraulic circuit for the same flow at the pumps. This reduces cycle time and increases energy efficiency.

9. What type to choose between horizontal and vertical tying?

The vertical tie has a reduced footprint than a horizontal tie, but the horizontal tying mechanism is easier to maintain being at the operator level also horizontal tying simplifies the cleaning process for the tying device and enables less pollution by small waste into needle slots which results in lower wear and greater tying success. Horizontally tied bales are easier to manipulate by the fork-lift operators.

For production of bale size (in cross section) which is not equilateral e.g., 110 cm horizontally x 75 cm vertically the vertical tie enables tying with 5 wires instead of 4 (at the same feed opening size) and this is the main advantage when choosing the suitable tying orientation.

To cope with “Hands-off” operation (means you only need someone to take away finished bales) and multi material waste the baler needs to be equipped with many accessories and sometimes these baler accessories doubled the price of the standard baler.

The ANIS High Load Volume series baler has been specifically designed by ANIS to solve the processing needs of high-volume recycling plants. This baler is designed with an exceptionally heavy built frame to provide maximum service in the difficult environments found in Material Recovery Plants (MRF). The heavy built frame is constructed with both welded and bolted steel beams and plate steel. A special hydraulic lock balances the compaction force (up to 200 tons) with the counterpressure force restricting the material in the extrusion channel maximizing density on every bale. This simple hydraulic system greatly reduces operating costs and reduces the risk of mechanical failures. Maximum density is achieved to increase truck loading, reducing transportation costs. Production of over 25 tons per hour OCC is available.

ANIS balers come in a wide variety of configurations, sizes, and costs based on the materials being recycled and the output demands. ANIS provide industrial balers for a wide range of customers, from municipal recycling facilities and high-volume warehouses to smaller businesses just looking for a way to stop paying for cardboard removal.

11. What functions do baler accessories perform?

An unjamming device called a “Stamper” or »Material blockages remover » is designed to automatically clear jammed material from in front of the cutting edge, when processing heavy grade material (such as OCC). It is positioned directly above the shear blades for maximum effectiveness and easy maintenance.

The perforator for PET plastic bottles punctures and extrudes the air from the bottles for high-density, heavier and the homogeneous bales which lowers transport costs and prevents tie wire cracking especially when the sun shines on the bales and heat them.

Croswisse tying system: To hold the baled material together in uniform bales and obtain the best possible bale weight for expanding materials (in the case of PET, HDPE, foam or foil baling) the cross-tying system baler is recommended.

The material distributor (often known as a fluffer or ruffler) is retractable and used to break up compacted newspaper or disperse bundled newspaper and magazines in the feed hopper to produce a more uniform bale. It is a rotary blade driven by an electric motor into the hopper immediately above the baling chamber and speeds up the loading into the press chamber of bundled materials which weren’t pre-conditioned before baling.