Hose Retention System is designed to prevent whipping of a pressurized hose in the event of a hose separating from its fitting.

The energy contained within a pressure hose, in case of disconnection from the fitting, can be very dangerous to anyone or anything in its vicinity.

This is important for protecting the equipment and nearby personnel.

„In some jurisdictions hose whip restraints are required by law where there is risk to personnel from whipping hoses.”
– IHSA (International Hydraulic Safety Authority)

HOW DOES IT WORK?

The Hose Retention system does not operate during the moments of disengagiement of the flexible hose, but, if applied correctly, it ensures that the hose is fully disengaged from the ferrule that restrains it. During this step, the flexible hose gains velocity and power due to the pressure increase of the oil contained therein. 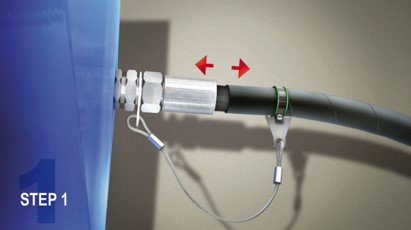 During this step, the pressurised oil exits from the flexible hose. The hose begins to release the energy contained therein, and gains considerable velocity, triggering a hazardous “whip effect” which is very dangerous to anyone or anything in its vicinity. 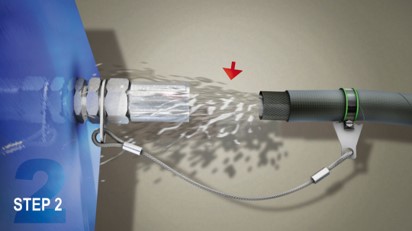 Once the hose has been disengaged and the pressure released, the flexible hose can be restrained. This is where the system gets into operation: the stainless-steel cable is tensioned and deformed while the plate cuts into the rubber of the hose, preventing the clamp, firmly attached to the hose, from disengaging. The hose clamp and plate start to deform in turn, elastically absorbing the force released from the travel of the flexible hose.
This is a critical step which occurs within just a few seconds in which the materials and the components of the system, previously sized and tested, stop the dangerous travel of the flexible hose. 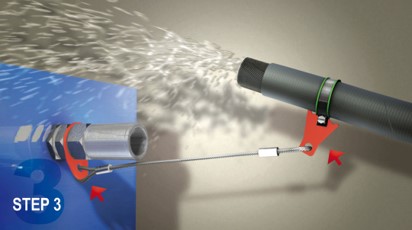 Accessories for safety at work